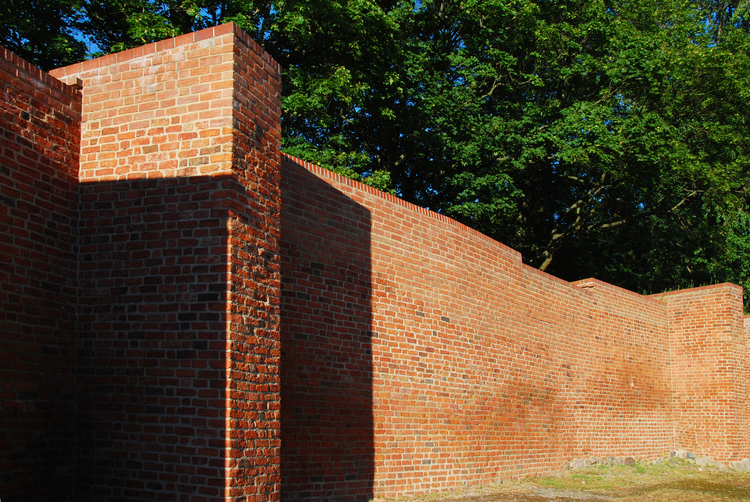 The preserved section of defensive walls is located in the centre of Koszalin, on Kazimierza Wielkiego and Marii Ludwiki Streets and between Adama Mickiewicza and Młyńska Street.

The construction of the first fortifications was connected with the moment when Koszalin was granted the town charter. This happened in 1266. At that time, a wooden-earth bulwark surrounded by a moat was built. In the years 1293-1310, brick walls with the length of 1600 metres were built. The defence was strengthened by 46 lookout posts – protruding square-shaped towers. The town could be accessed by three gates. The 1.3 m thick and 7 m tall brick wall survived to the beginning of the 18th century. After a fire of the town in 1718, the majority of walls were lowered to 3 metres, and probably then their surroundings were put in order. The bricks left from the lowered walls were used for the reconstruction of the town.  In the 19th century, the city gates were pulled down and the walls were covered with annexes and houses once again. Thanks to this, fragments near Kazimierza Wielkiego and Marii Ludwiki Streets as well as between Adama Mickiewicza and Młyńska Streets have been preserved. Systematic maintenance works resulted in the preserved walls look magnificent against the orderly surroundings.

More on the topic:
Geolocation
Search nearby
The mediaeval defensive walls
COMMENTS
Sign in to leave a comment.