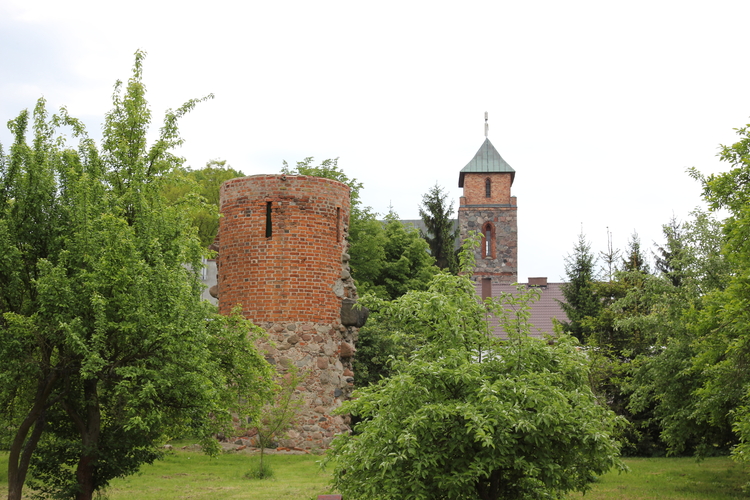 Banie is situated approximately 30 km south of Gryfin. Baszta Prochowa is located in a meadow between Bolesława Chrobrego, Ogrodowa and Sportowa Streets, north from the church.

Near the presbytery of the Church of Our Lady Help of Christians there are the only remains of the defensive fortifications in Banie – Baszta Prochowa. The structure is situated in the centre of the village.

Baszta Prochowa was built in the 14th-15th century. The contemporary line of defensive walls had two gates and twenty towers. The town fortifications were destroyed in 1478 and then five years later in 1483 a commander of the Order of Saint John from nearby Swobnica ordered the walls to be demolished. In 1766 it was decided to demolish also the remaining fortifications. From the walls surrounding this small town (Banie were granted city rights in 1945) only Baszta Prochowa was spared.

The structure was built at the beginning of the 15th century on the remains of the 14th-century shelter. The structure was created on the plan of a circle. The lower part of the tower constituted the basis for the shelter and it was made of fieldstone. To build the upper part brick was used. In the walls of the tower we can find shooting apertures. The entire structure is topped with a defence porch which is finished with a simple, but partially destroyed wall without battlements. On the top of the structure there is a brick cone with a crow's nest.

It is hard to explain why during the demolition of the walls Baszta Prochowa was spared – it might be related to Detlev von Walmoden. According to a legend, this Grand Master of the Order of Saint John was buried in the basement of the tower. He was murdered in 1399 by the residents of Banie. It is highly probable that the ashes constituted the reason the tower was spared. This scenario is based on historical facts. The residents of the village were in conflict with the monks from Swobnica, as the monks, the owners of a nearby lake, did not allow the residents of Banie to fish there. The conflict was incited by the fact that for some time the Order of Saint John owned the town (the cross in the crest of the town is to memorize those times). Maybe the Grand Master of the Order of Saint John, Detlev von Walmoden, fell victim to the conflict between the residents of Banie and the monks. He was then buried by his executioners in the basement of the tower.

Baszta Prochowa was included on the list of the monuments of the Zachodniopomorskie [West Pomerania] Province in December 1963.

More on the topic:
Geolocation
Search nearby
Baszta Prochowa [The Gunpowder Tower]
COMMENTS
Sign in to leave a comment.