The Town Hall
The town hall in Kamień Pomorski was built in several stages; the western part of the building is the oldest. The construction of the town hall was st...
14-06-2021 ·

Ratusz [the Town Hall]
Being both a historic and current seat of the City Council, it is the second biggest and most spectacular monument, right after the basilica, in Kołob...
09-06-2021 ·

Świna’s Delta
Świna’s Delta is an area of special bird protection, therefore its priority is protecting birds and providing the best possible conditions for breedin...
09-06-2021 ·

The fragments of city and cathedral fortifications
The construction of the system of defensive walls surrounding Kamień Pomorski was began in the first half of the 14th century after the attack of the...
09-06-2021 ·

The Millennium Hall
It is the largest sports hall in the County with pitches and gymnasiums suitable for numerous team and individual sports disciplines, and a 25-metre s...
09-06-2021 ·

The municipal stadium
The Świdwin Municipal Stadium is the main venue for most sports events in the town. The building consists of a grassy pitch, side pitch, tennis courts...
09-06-2021 ·

The Observation Tower
In the late 19th century, in 1895, in the time of mayor Ernest Melcher, a tower was built in honour of soldier fallen during the Prussian wars with...
10-04-2015 ·

The Granary
The granary was built in the 18th century. It is a building with a framework structure, which used to serve as cereal storehouse. At present, it is...
18-01-2015 ·

Atrium Shopping Centre
The Atrium Koszalin Shopping Centre was founded in 2008 and is currently the largest shopping and entertainment centre in the region. The centre is...
30-04-2015 ·

The parish church of the Holy Spirit
The Romanesque church dating from the thirteenth century has a free-standing tower as the only one in the region. The church has a form of a basili...
25-03-2015 ·
The Colleoni’s Monument
Szczecin
Home / Discover / Pomorze heritage / Historic Monuments 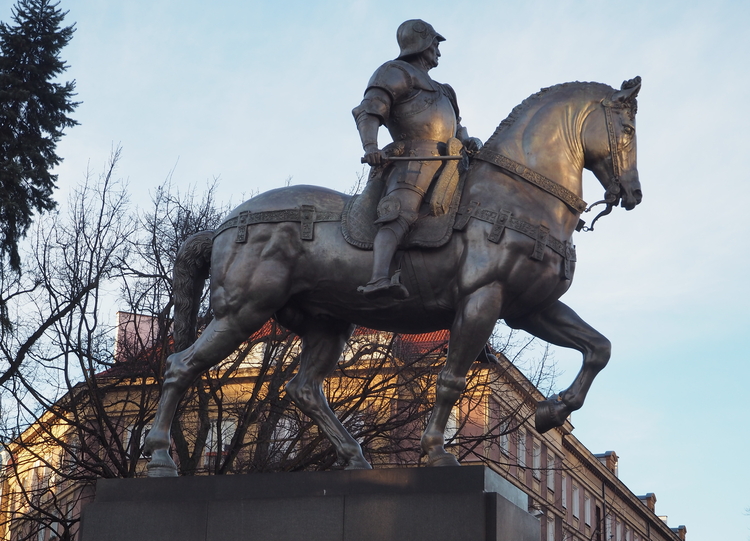 The statue of Bartolomeo Colleoni is located in the city centre, on Lotników Square. It can be reached from Jagiellońska, Mazurska, Kaszubska, and Małopolska Street, and from Jan Paweł II Alley on the side of Grunwaldzki Square. For non-motorized tourists, the best way to reach the location is to take trams no. 3, 8, or 10 and going to Żołnierza Polskiego Square.

The statue represents a famous Venetian condotierre (a leader of mercenary units, who formed troops at his own expense). It is one of the most impressive replicas of the most famous Renaissance works. The original statue was made by Andrea del Verrocchio. The replica was created for the need of the Municipal Museum in Szczecin in 1913. The monument was given to Warsaw as a part of support for the destroyed capital city. There, it was placed at the Academy of Fine Arts’ yard. The statue has not returned to Szczecin until 2002. In 2009, it was renovated – a weapon held in the right hand was restored.

More on the topic:
Weather
Geolocation
Search nearby
The Colleoni’s Monument
COMMENTS
Sign in to leave a comment.