The Drawa River
The Drawa River is the right-bank tributary of the Noteć River. The total length of the river is 185.9 km a...
10-08-2015 ·
The manor farm and chateau
Home / Discover / Pomorze heritage / Palaces and manor houses 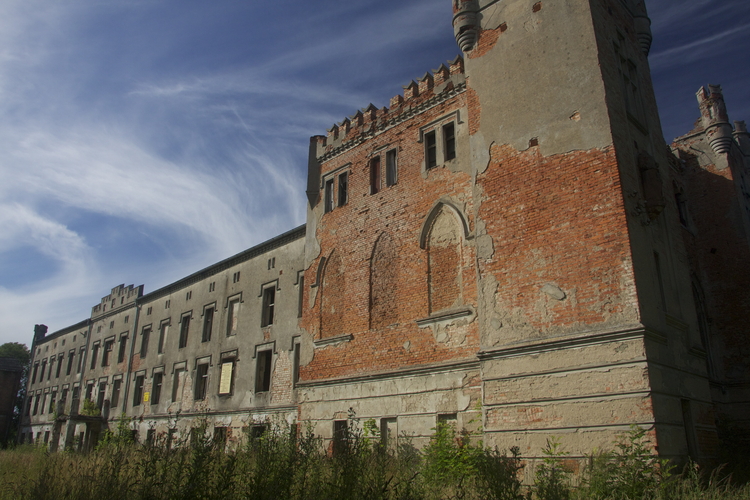 The manor farm is at the end of the village, on the right side of the road. Kozia [Goat] Mountain is located 6 km west of Karlin at the road No. 6 en-route from Gdańsk to Szczecin.

The manor house on Kozia Mountain dates from the seventeenth century. The founder of the palace and park complex was Heinrich Friedrich von Podevils. The farm consists of a chateau, manor park, granary, remains of the mausoleum (brick burial chapel in the park from the early nineteenth century, neo-gothic wattle and daub barn, utility building with an annexe, two utility buildings and a distillery. The chateau was rebuilt several times: in 1818, 1850 and in the twentieth century. The chateau was built in the Baroque style on an extended rectangular plan. As a result of reconstructions, it became a neo-Gothic building. Its area was 1400 m2and the cubic capacity of 7800 m3. The property is brick, three-storey, richly decorated by Gothic cloisters, towers and balconies. The windows are rectangular, but lancet in the east wall under the loggia, and ornamented. The chateau consisted of a 16-axle two-story body, in which three central axles were topped with a crow-stepped gable. Donjons tower slightly over the roof of the building. A porch with columns leads to the main entrance. The eastern elevation is the most spectacular. It was built as a separate facade. Its middle part is decorated with an arcaded loggia on the second floor, spanned by corner alcove towers. Sculptures of knights and ancestral coats of arms have been preserved on the towers. After the war, the chateau shared the fate of most other similar structures; namely, it was taken over by the Soviet army. Then the building was managed by State Farm. Today, the chateau is in a state of ruin. It is in private hands and nothing is implied that it will be renovated.

A park was created behind the chateau in the eighteenth century. The park area is approx. 4 ha and has features of a landscape park with romantic elements. This beautiful green area located in the valley is crossed by the Młynówka River. An access road leads to the park. There were many exotic species of trees in the park. A clearing sloping toward the Młynówka River, where you can enjoy a beautiful view, is an interesting place. The park was rebuilt in the second half of the nineteenth century. Then its surface area was doubled, exotic trees like tulip trees imported all the way from the USA were planted, romantic elements were included. A burial chapel, which is now ruined, was built in the park. At present, the park has a large group of high trees. The tree stand has a considerable height because of the very good soil conditions. There are monuments of nature in the park.

The most impressive building next to the chateau is the granary. It was built in the mid-sixteenth century. It is a wattle and daub construction. It has been rebuilt and even destroyed over the centuries as a result of various activities. Then, the granary was rebuilt and modernised under the supervision of the Napoleonic army. Later the building underwent a major renovation in the 1970s. As a result of this work, the half-timbered construction of the southern wall was liquidated, windows and doors were replaced, but leaving the old staple.

The area belongs to a private owner. The chateau can be seen from the outside.

More on the topic:
Geolocation
Search nearby
The manor farm and chateau
COMMENTS
Sign in to leave a comment.