The parish church of the Blessed Virgin Mary Queen of the World
The church was erected in several stages from the end of the thirteenth century to the fifteenth century. It was rebuilt several times at that time...
07-04-2015 ·
Pałacyk pod lwami
Gryfino
Home / Discover / Pomorze heritage / Palaces and manor houses 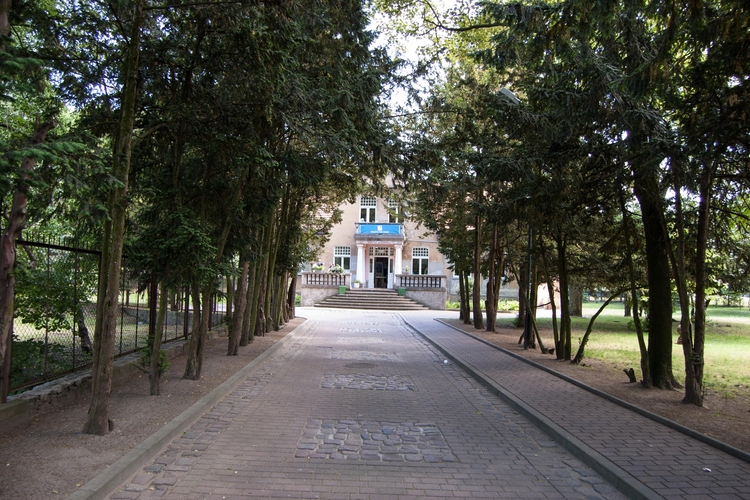 You can get to Gryfino from Szczecin by trains, suburban buses, or privately by choosing the national road no. 31. Pałacyk pod Lwami is located at 48 Bołesława Chrobrego Street.

Still within the Old Town, at 48 Bolesława Chrobrego Street, there is a villa which is commonly called 'pałacyk pod lwami' by the locals. Its name, which can be translated into English as the Palace under the lions, comes from the statues of lions that guard the entrance at the main gate. The lions are a remnant of the bridge which once ran above the ditch supplying water into the town moat.

The villa dates from the nineteenth century (a moat, eliminated in the eighteenth century, passed through this area in the Middle Ages) and serves as a kind of a suburban mansion - suburban one, despite the fact that it was built in the town. It was due to the land purchased by a German industrialist Henrich Moller. The entrepreneur came into possession of a large part of municipal gardens that were outside the medieval fortifications.

„Pałacyk pod lwami” was built in three stages. Firstly, the residential part of the villa was completed; then - the eastern part of the building, and finally, farm buildings and a coach-house were built. The villa is two-storied. In the middle of the courtyard, which is in front of the building, we can find a stone fountain glazed in green. Motifs of aquatic animals and masks are found on the decorative tiles.

The villa is surrounded by a park with a rich tree stand - primarily consisting of conifers such as sycamore, yew or black pine. An avenue planted with yews leads to the building. Before World War II, numerous stone sculptures used to be in the park, but there is only one left. The park borders the remnants of the town walls.

After World War II, many associations and groups operated in the park. The  headquarters of choral societies, a troop of the Polish Scouting and Guiding Association or a youth hostel were, among others, in the building. At the end of the 1950s, the building was handed over to schools - since 1958 a branch of Primary School No. 1 has been there, and in the 1960s - Vocational School of Agriculture. Since the 1970s , branches of both Primary Schools No. 1 and 2 as well as a Community Centre have been simultaneously operating in Pałacyk pod Lwami.

Today, Gryfino's Community Centre operates in the building. A branch of the Centre was moved to the palace in September 2005.

: The Community Centre in Gryfino
Search nearby
Pałacyk pod lwami
COMMENTS
Sign in to leave a comment.