The Polish Arms Museum
The centre is within the paid parking zone and the network of one-way streets. Getting to the area of ​​interest by E. Gierczak Street is only poss...
04-07-2015 ·
The Dormition of the Most Holy Mother of God Orthodox church
Home / Discover / Pomorze heritage / Religious monuments / Churches, monasteries, chapels 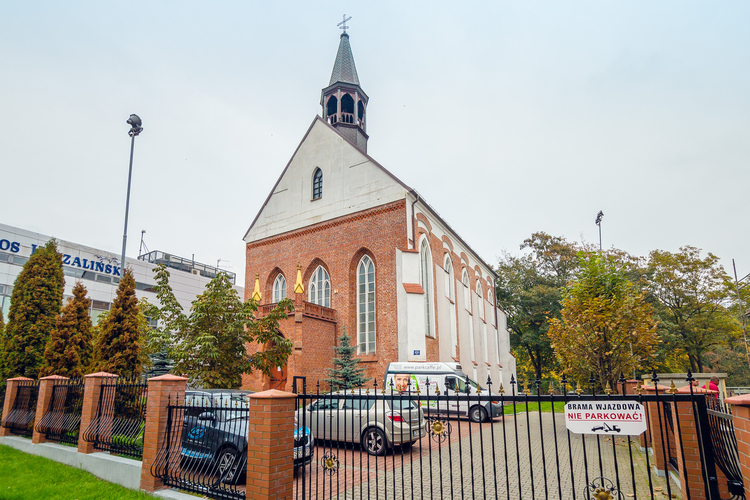 The parish Orthodox church is located in the north-eastern part of the town, near the town walls on Adama Mickiewicza Street in Koszalin. It belongs to the Koszalin deanery of the Wrocław-Szczecin diocese of the Polish Autocephalous Orthodox Church.

The Orthodox church (a former castle chapel) has been entered into the register of historic monuments in November 1956 under the number A-768.

It is the Gothic castle church from the turn of the 13th and the 14th centuries – currently an Orthodox church. The church was built about 1300 as a convent church for Cistercian nuns who came to Koszalin in 1278. The oldest mention about the church comes from 1491.

It is a brick, aisleless church built on a rectangular plan. A porch was added later on the western side of the building. The presbytery has not been preserved. The building is topped by a pitched roof with an octagonal tower and a steeple. The nave is illuminated by lanceted windows. The most interesting, eastern façade of the building still has a Gothic rood arch and an ornamental brick parapet of the rood screen. After the Reformation, when the nuns abandoned the church, it fell in disrepair. It was rebuilt by Duke Franciszek in the years 1602-1609, and it functioned as a castle church. During the fire of the town in 1718, the building burnt down. The major refurbishment was conducted in the years 1818-1819. In 1863, the church was given a pipe organ. After the Second World War, the convent church was transformed into an Orthodox church.

More info: www.cerkiewkoszalin.cba.pl
More on the topic:
Geolocation
Search nearby
The Dormition of the Most Holy Mother of God Orthodox church
COMMENTS
Sign in to leave a comment.