ŚWINOUJŚCIE ‘Basen Północny’ – The North Dock
This is the largest marina in Western Pomerania. It is a good shelter for those returning from the sea, and the harbour point for those who choose...
20-05-2015 ·
Granary
Home / Discover / Pomorze heritage / Technology and engineering monuments 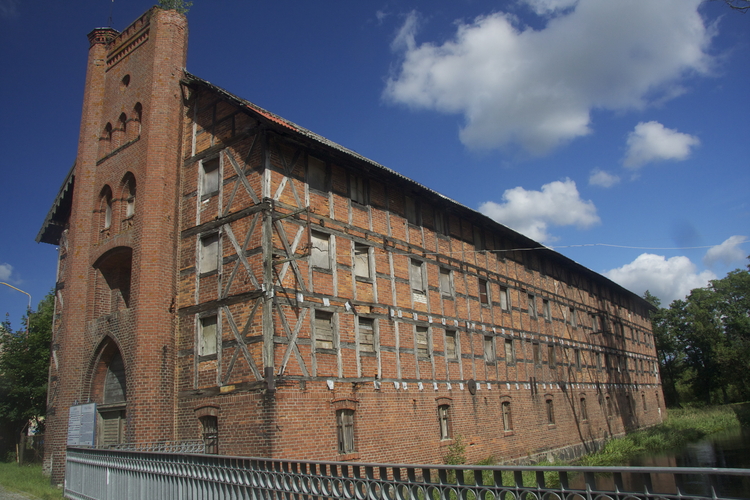 The granary in Karlino is situated at Szczecińska Street, on the northern bank of Kanał Młyński [the Mill Channel], close to Wyspa Biskupia [the Bishop’s Island] at the entrance to Karlino on the road running from Szczecin.

The granary dates back to the end of the nineteenth century. It was probably built in place of an older building. The building is a masonry building with horizontal and vertical beams, built in a neo-Gothic style. It is one of the characteristic places in the town. It is presented on most drawings, paintings and postcards. The granary has four 47.5 x 13 m storeys and a high gable roof. The building has no exterior plaster layer. The building is rectangular in plan. The ground floor, based on stone socle, is made of ceramic bricks. The walls of the upper storeys feature horizontal and vertical beams and bricks in between. The structure of the building features wooden beams in the corners and in the middle of the walls. The construction bears woodworking marks. The wooden elements of the building were connected by straight or diagonal grooves and overlapping mechanisms. The top of the gable roof features planks that protected the building from wind and rain. A neo-Gothic tower overlooks the roof. The interior of the granary featured beamed ceilings and two rows of pillars with binding joists. After the war the building was managed by Państwowe Gospodarstwo Rolne [the State Agricultural Farm] which used the building for storage of grain. It was used until 1989. Currently the granary has a private owner. The owner intends to transform the building into a hotel which will be a part of a complex formed by all the buildings around Wyspa Zamkowa [the Castle Island]. At present, the building can be viewed from the outside only and the entry on the premises is prohibited. The building will undergo extensive renovation and adaptation for its new purpose.

More info: www.karlino.pl
More on the topic:
Geolocation
Search nearby
Granary
COMMENTS
Sign in to leave a comment.