The Drawa River
The Drawa River is the right-bank tributary of the Noteć River. The total length of the river is 185.9 km a...
10-08-2015 ·
Old Town
Home / Discover / Pomorze heritage / Zabytkowa zabudowa 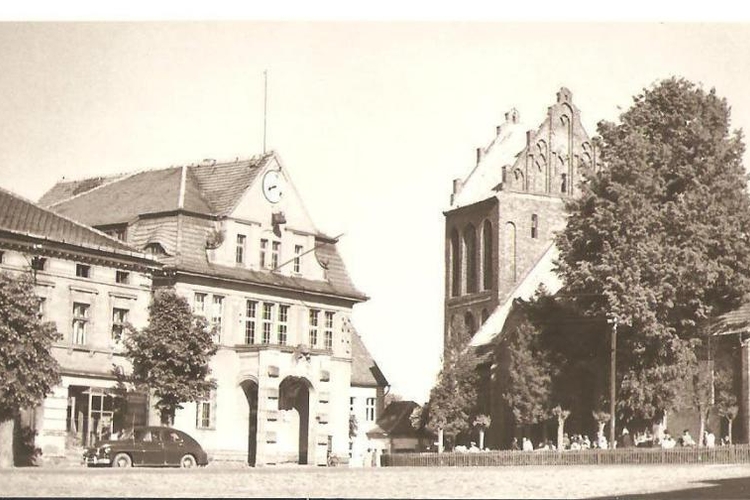 The Old Town is situated in the centre of the town. If you are entering the town from the direction of Białogard, you will drive straight to the market square.

The Old Town of Karlino is the centre of the town. There is a Town Hall, a church and a few old residential tenement buildings. Currently, the market square is referred to as Jan Paweł II [John Paul II] Square. The Old Town had its look changed many times over the centuries. It particularly refers to the Town Hall building. According to the oldest surviving representation of the Old Town, the Town Hall was a building smaller than the church, but equally majestic. The building was constructed in the place of the old Town Hall which burnt down in 1643 when a fire hit the town. At the time, the Town Hall was situated in the very centre of the Old Town. Unfortunately, the newly-constructed building was also gutted by a devastating fire on 18 April 1685 on Good Friday. The next building was constructed in 1705 in place of the old one. The newest building was more solid, with wattle and daub construction, daubed with clay. The roof was covered with conventional tiles and pantiles, and it featured two chimneys. The ground floor housed: garrison rooms, tax office, meeting room and a small jail. The first floor housed the Town Council and garrison rooms. The attic was used to store wool. The building survived 100 years until its poor technical condition started to endanger the life of its users. Thus, the works on the new Town Hall began. It was built in place of a former cemetery which was moved to another location. The new building was built in western frontage. The decision was unwise as the new building in large part obstructed the view on the church. The construction was completed in 1800 and the market square became a large open space. This building was also met by a sad destiny. On 27 January 1907 the inhabitants of the town celebrated the birthday of Wilhelm II by adorning the building with candles and lanterns which led to another mishap. The fire which broke out gutted the Town Hall. The foundations were the only thing left. It was rebuilt in 1913 and situated at the place of another building in the corner at Waryńskiego Street. Thus, the view on the church was unobstructed again, and one could see it in its full glory. Today’s Town Hall is an eclectic building with a neo-Gothic vault. The elevation is embellished with rich moulding and neo-Renaissance top with a cartouche and the coat of arms of the town. The front elevation features a clock. In 2006 the building was renovated and provided with lighting which illuminates the building at night. The remaining buildings in the Old Town of Karlino are typical for contemporary urban architecture. The house at 17 Plac Jana Pawła II Street, also called ‘Napoleon’s house’ has an interesting history. The name is misleading as the house has no connection with Napoleon. However, one of the emperor’s generals – Parma – stationed there. Over the years, a legend arose saying that it was Napoleon himself who stationed in the house. But the house was visited by another notable person, namely Duchess Louise, the Queen of Prussia. The event took place in 1798. The Queen allegedly staid at the house during her journey from Berlin to Królewiec. The place was selected because the building was new, it had a kitchen and it satisfied the needs of the Queen. Today, the first floor of the building is used for residential purposes and the ground floor will probably serve as a Tourist Information Centre.

More info: www.karlino.pl
More on the topic:
Geolocation
Search nearby
Old Town
COMMENTS
Sign in to leave a comment.