The Community Centre in Nowogard
The Community Centre in Nowogard is a major cultural centre in the commune. Local children and young people can animate their time by taking part i...
23-05-2015 ·
The Immaculate Conception of the Blessed Virgin Mary Roman Catholic church in Police
Police
Home / Plan your trip / Practical information / Places of religious cult / The Roman Catholic Church 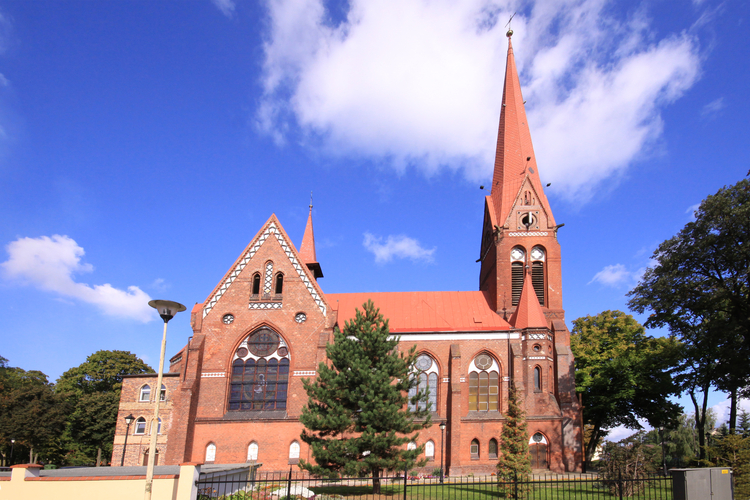 The Immaculate Conception of the Blessed Virgin Mary Roman Catholic church in Police is located in the Old Town. Surrounded by Mazurska, Wojska Polskiego, and S. Staszica Streets, it is situated in the vicinity of the Old Town Park and a churchyard cemetery. Along the church wall and on the opposite side of Staszica Street there are several places for car to be parked. By the entrance from Wojska Polskiego Street, as well as from the clergy house on Mazurska Street, there are stops of buses no 101, 102, 103, 109, 110, and 111.

The Immaculate Conception of the Blessed Virgin Mary Roman Catholic church in the old part of Police is a Marian church. Its beginnings are connected with the end of the former Gothic Marian church from the turn of the 13th and the 14th centuries, which was situated at the Market Square of the Old Town till the 19th century. The church on Mazurska Street was built in 1894, so it is a relatively young church in comparison with the rest of churches of the district of Police. Its tall and tapering tower topped with an orb with a cross seems to dominate over the town, because it is visible from many places. Already at the entrance to Police from Mścięcino, the tower emerges from behind tree tops and welcomes people arriving at the town. The church was built of brick on a Latin cross plan. During the Second World War, the roofing of the church was damaged, but it was rebuilt after the end of the war. On December 8th, 1951, the parish was consecrated as Roman Catholic parish of the Immaculate Conception of the Blessed Virgin Mary, and since then a church fair has been organized on the anniversary of the consecration. In the presbytery, there is a cross of St Francis of Assisi. There are also two side altars in the church – in the southern aisle there is an altar of Our Lady of Częstochowa, while in the northern aisle, there is an altar of the Divine Mercy. The church has stained glass windows depicting saints. This church was a place where the idea of the famous “Cecyliada” – the Police Days of Music – which was introduced to the calendar of events in Police due to Rev. Mirosław Oliwiak, was born. The performances and concerts take place up to this day, but the host church is the St Casimir the Crown Prince church in Nowe Police. Currently, three priests minister to the parish along with Rev. Marian Kucharczyk – a parish priest.

More info: www.niepokalana.police.parafia.info.pl
More on the topic:
Geolocation
Search nearby
The Immaculate Conception of the Blessed Virgin Mary Roman Catholic church in Police
COMMENTS
Sign in to leave a comment.