The sports hall
The sports hall is situated within the area of the holiday resort. The hall is available to the resort’s guests and to everybody who is willing to...
12-01-2015 ·
Brama Królewska [The Royal Gate]
Szczecin
Home / Discover / Pomorze heritage / Fortifications and military structures / Town walls 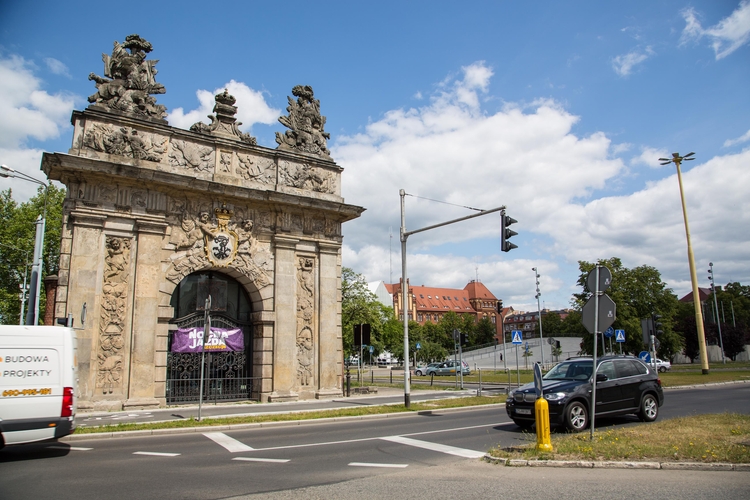 The Royal Gate is situated by Hołdu Pruskiego Square, and in order to reach it using city transportation, we should choose trams no. 1, 3, 6, 7, 8, or 10. We get off the tram on the “Plac Żołnierza” stop and we head towards the Oder River. The gate is located about 300 meters from the stop.

The Royal Gate is one of two city gates that have survived up to this day from a large system of Szczecin’s fortifications. The building was erected in the years 1725-1728, according to the design by a Dutch architect Gerhard van Wallrawe. The Royal Gate – called earlier “Anklamer Tor” – was erected in place of the former Mill Gate. This name was valid until 1840; since 1841, the gate has been called the Royal Gate in honour of its founder, King Frederick William I.

As in the case of the Port Gate, the walls of the building are decorated with the sculptures made by Bartholome Damart. On the gate we can found Mars with a sword and a shield and Hercules with a club and a lion’s hide. Over the passage, there is panoply with an escutcheon and a Prussian eagle; the whole is surrounded by a chain of the Order of Black Eagle, and there is a crown at the top. The Royal Gate is decorated with sculpted elements of weaponry, armours, shields, and banners.

During the Second World War, for fear of being damaged, they were hidden in a forest, and the building was planted with ivy. Owing this, the object was not destroyed. Embellishments hidden in the Arkona Forest were found in 1957 and remounted on the gate.

The building was modernized in 1994. In the 1990s, there was an art gallery inside, and since 2000, the “Brama Jazz Café” is has been opened there. The gate has been entered into the provincial register of historic monuments in June 1954.